Partnership
amongst Nigerians
in Austria

NIDOE Austria
is a non-profit organisation created to provide a platform for Nigerians residing in Austria, to participate in the development of Nigeria.

It is committed to tapping into the knowledge and skills of Nigerians in Austria in a joint effort with other Nigerians in the Diaspora worldwide for the development of Nigeria.

It is a platform for Nigerian academicians and professionals for networking amongst one another in the Diaspora as well as at home, and with the Nigerian Government and other public Agencies. 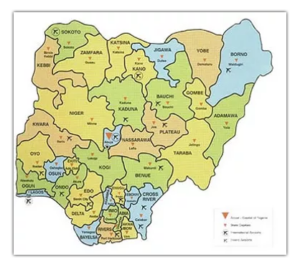 Nigeria is situated in the West African region and lies between longitudes 3 degrees and 14 degrees and latitudes 4 degrees and 140 degrees. It has a land mass of 923,768 sq.km.. It is bordered to the north by the Republics of Niger and Tchad. It shares borders to the west with the Republic of Benin, while the Republic of Cameroun shares the eastern borders right down to the shores of the Atlantic Ocean which forms the southern limits of Nigerian Territory. The about 800km of coastline confers on the country the potentials of a maritime power. Land is in abundance in Nigeria for agricultural, industrial and commercial activities.
CLIMATE

Temperatures across the country is relatively high with a very narrow variation in seasonal and diurnal ranges (22-36t). There are two basic seasons; wet season which lasts from April to October; and the dry season which lasts from November till March. The dry season commences with Harmattan, a dry chilly spell that lasts till February and is associated with lower temperatures, a dusty and hazy atmosphere brought about by the North-Easterly winds blowing from the Arabian peninsula across the Sahara; the second half of the dry season, February – March, is the hottest period of the year when temperatures range from 33 to 38 degrees centigrade. The extremes of the wet season are felt on the south eastern coast where annual rainfall might reach a high of 330cm; while the extremes of the dry season, in aridity and high temperatures, are felt in the north third of the country.

In line with the rainfall distribution, a wetter south and a drier northern half, there are two broad vegetation types: Forests and Savannah. There are three variants of each, running as near parallel bands east to west across the country. Forests Savannah Saline water swamp Guinea Savannah Fresh water swamp Sudan Savannah Tropical (high) evergreen Sahel Savannah Rainforest.

There is also the mountain vegetation of the isolated high plateau regions on the far eastern extremes of the country (Jos, Mambilla, Obudu).

Nigeria is famous for her huge population of about 120 million people – the largest national population on the African continent. This population is made up of about 374 pure ethnic stocks. Three of them, Hausa, Ibo and Yoruba are the major groups and constitute over 40 per cent of the population. In fact, about 10 ethnic linguistic groups constitute more than 80% of the population: the other large groups are Tiv, Ibibio, Ijaw, Kanuri, Nupe, Gwari, Igala, Jukun, Idoma, Fulani, Edo, Urhobo and Ijaw. The gender divide of Nigeria’s population, as indicated by the last census in 1991, reflects an unusual imbalance in favour of male dominance; 51% male: 49% female.


Due to a massive expansion in the education sector in the last two decades, the coloration and quality of the Nigerian work force has changed to include a large corps of highly trained personnel in mechanical, civil, electrical, electronics, chemical and petroleum engineering and biotechnics. There are at present over 30 Federal and State Universities, some of them specialist -Technology and Agriculture. In addition there are at least 20 Federal and State Polytechnics. Over 70,000 graduates in various disciplines from these institutions every year. Disciplines, apart from pure sciences, engineering and technologies, include social sciences, business studies (management, banking and finance), architecture, environment and urban management studies. Also, a sizeable Nigerian population has been and is being trained outside the country, in some of the best colleges in the United States, Canada, United Kingdom, Germany, France, Russia, Japan and China.

Every year, about 2,000 of these Nigerians return home to seek employment or accommodation within the economy.

For the less skilled and unskilled labour, the country depends on the primary and secondary school systems whose annual enrolments are over 3.5 million and 1.5 million, respectively.

Nigeria, in addition to its huge population is endowed with significant agricultural, mineral, marine and forest resources. Its multiple vegetation zones, plentiful rain, surface water and underground water resources and moderate climatic extremes, allow for production of diverse food and cash crops. Over 60 per cent of the population is involved in the production of the food crops such as cassava, maize, rice, yams, various beans and legumes, soya, sorghum, ginger, onions, tomatoes, melons and vegetable. The main cash crops are cocoa, cotton, groundnuts, oil palm and rubber. Extractions from these for export and local industrial use include cocoa flour and butter, rubber crumb, vegetable oil, cotton fibre and yarn. The rain forests have been well exploited for timber and wood products of exotic and popular species.

Oil and Gas, by value, are the most important minerals. They are exploited and produced in the Niger Delta basin and off-shore on the continental shelf and in the deep-sea of the territorial waters. Nevertheless, there are significant non-oil mineral deposits on land many of which have been identified and evaluated: coal, iron ore, gypsum, kaolin, phosphates, lime -stone, marble, columbine, baryte and gold.

The Federal Republic of Nigeria consists of thirty-six states, and the administrative headquarters and capital city is Abuja located in the Federal Capital Territory, which is geographically situated in the middle of the country.

Effective participation in governance by all adults is assured through the sharing of powers, revenue and responsibilities between the three tiers of government, i.e. the Federal Government, the State Governments and the various Local and Municipal Councils of the federation.

With a population of over 200 million people, Nigeria is obviously the largest market in sub Saharan Africa with reasonably skilled and potential manpower for the efficient and effective management of investment projects within the country. It is well connected by a wide network of motorable all-season roads, railway tracks, inland waterways, maritime and air transportation.

Nigeria’s economy could be aptly described as most promising. It is a mixed economy and accommodates all corners, individuals, corporate organisations and government agencies, to invest in almost all range of economic activities. Since 1995, the Government has introduced some bold economic measures, which have had a salutary effect on the economy by halting the declining growth in the productive sectors and putting a stop to galloping inflation; they have reduced the debt burden, stabilised the exchange rate of the Naira and corrected the balance of payments disequilibrium.

In the 1995 and 1996 budgets, Government put in place some fiscal measures, which addressed the exchange rate regime and the capital flight issue, which hitherto inhibited project planning and execution. The policy of expanded production through guided deregulation paid off in 1996 when the economy recorded a real growth of 3.2% of GDP the rate of inflation declined appreciably from the high seventies to the low twenties.

Prior to 1999, the major problem of the health sector in Nigeria was identified to be the mortality rate among women and children due to preventable diseases, undernourishment, communication of under five years, as well as inadequate and decaying health facilities. These problems were further compounded, over the years, by inadequate funding, due to competing needs of other sectors such as education, housing, agriculture etc. However, the Obasanjo Administration rose to the occasion to stem the tide. The National Program on Immunization was established to take care of the high mortality rate among children, and eradicate communicable and vaccine-preventable diseases, and it has been highly successful. Specific days of the year have been set aside by the Government, during which health officials go from house to house to immunize children against major childhood diseases.

Moreover, the immunizations are readily available at various hospitals and health centers, at no cost to parents. The Government is being assisted in this regard by many Non-Governmental Organizations and International Agencies. The Rotary International, for example has committed millions of dollars to the project known as “Kick Polio out of Africa” campaign, the positive result of which has been tremendous.

Other measures the Government has taken to enhance the quality of health of Nigerians are the establishment of the National Action Committee on Aids (NACA) to combat the HIV/AIDS scourge, the National Foods and Drugs Administration Commission (NAFDAC) which has brought international recognition to Nigeria. The Government has equally set up the National Health Insurance Scheme (NHIS) which is designed to make health-care affordable for all citizens by making everyone contribute to the healthcare system, instead of putting the whole burden on Government, as it is the case currently. The scheme will soon be operational.

To sustain improvements in health-care delivery, attention is being paid to the expansion and strengthening of the primary health care system throughout the country. Family and reproductive health services are being strengthened, with particular emphasis on fighting HIV/AIDS and other sexually-transmitted diseases, as well as malaria. Rehabilitation of strategic Teaching and Specialist Hospitals are also on-going.

Nigeria’s current industrial policy thrust is anchored on a guided dc-regulation of the economy and Government’s dis-engagement from activities which are private-sector oriented, leaving Government to play the role of facilitator, concentrating on the provision of incentives policy and infrastructure that are necessary to enhance the private sector’s role as the engine of growth. The industrial policy is intended to:

The Nigerian Enterprises Promotion Acts which hitherto regulated the extent and limits of foreign participation in diverse sectors of the economy were repealed in 1995. The principal laws regulating foreign investments now are, the Nigerian Investment Promotion Commission Decree and the Foreign Exchange (Monitoring and Miscellaneous Provisions) Decree, both enacted in 1995.

Given the need to stabilize the banking and finance sectors, and promote confidence in these vital institutions, the Failed Banks (Recovery of Debts) and Financial Malpractices in Banks decrees of 1994 were put in place. The Investment and Securities Decree was also promulgated to update and consolidate capital market laws and regulations into a single code.

Under the Privatisation and Commercialisation law of 1988, the government successfully sold its holdings in industrial enterprises and financial institutions, and such divestments were made by way of “Offers for Sale” on the floors of the Exchange, so that ultimate shareholdings in such enterprises could be widespread. However, government retained full control of the public utility service corporations.

The 1997 Budget proposed the repeal of all existing laws that inhibit competition in certain sectors of the Nigeria economy. Consequently, with the promulgation of the Public Enterprises Promotion and Commercialisation Decree in 1998, private sector investors (including non-Nigerians) will now be free to participate in and compete with government-owned public utility service corporations in the areas of telecommunications, electricity generation, exploration of petroleum, export refineries, coal and bitumen exploration, hotel and tourism.

Scroll to Top
We use cookies on our website to give you the most relevant experience by remembering your preferences and repeat visits. By clicking “Accept All”, you consent to the use of ALL the cookies. However, you may visit "Cookie Settings" to provide a controlled consent.
Cookie Settings Accept All
Manage consent

This website uses cookies to improve your experience while you navigate through the website. Out of these, the cookies that are categorized as necessary are stored on your browser as they are essential for the working of basic functionalities of the website. We also use third-party cookies that help us analyze and understand how you use this website. These cookies will be stored in your browser only with your consent. You also have the option to opt-out of these cookies. But opting out of some of these cookies may affect your browsing experience.
Necessary Always Enabled
Necessary cookies are absolutely essential for the website to function properly. These cookies ensure basic functionalities and security features of the website, anonymously.
Save & Accept